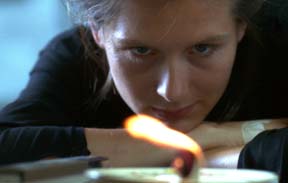 
"My father used to say that film is the art of seeing, and that's why I can't show these pictures that just exploit anything that is left to exploit from people's eyes and minds. And I won't be forced to show films where the people stumble out benumbed by stupidity, that destroy their very lust for life, that force them to kill their feelings for themselves and the world."
-- from Wim Wenders' Kings of the Road


Caravan/Prague A new feature-length documentary by Zack Winestine, about a bicycle caravan traveling across Europe to shut down the annual meetings of the International Monetary Fund and World Bank.
Pathfinder Pictures The US distributor of States of Control.
Strawberry Fields A film directed by Rea Tajiri. Cinematography by Zack Winestine. A rebellious 16-year-old Japanese-American girl travels cross-country, accompanied by her boyfriend, the all-too-real ghost of her sister, and her parents' repressed memories of life in the WWII internment camps. Official selection Venice International Film Festival.
Richard Termini Composer of the States of Control soundtrack. Music clips, model rocketry, and Betty Page...


Village Voice article about community activists, including Zack Winestine, fighting to preserve the Greenwich Village waterfront neighborhood in which States of Control takes place.
Maritime Mile A book about the history of New York's Greenwich Village waterfront, with a gallery of color photos by Zack Winestine.
Bureau of Public Secrets Exactly what it says. In some respects, States of Control is the negative image of some of the ideas to be found at this site.
Infiltration The art and science of exploring restricted man-made environments, or, the joy of going where you're not supposed to.
Friends of the High Line This group is working to 'save' the High Line (or Hi-Line), a formerly little-known elevated freight railroad line running down the lower West side of Manhattan (it's being turned into a park). It was an extraordinary place, and the setting for a scene in States of Control.
Transportation Alternatives Cars bad, bicycles good. Excellent links.
Carbusters International group (based in Prague) with lots of creative ideas for eliminating society's addiction to cars.
Swedish Audio Bat Detection The original Swedish bat detector. Bats are in trouble, and need all the help they can get.