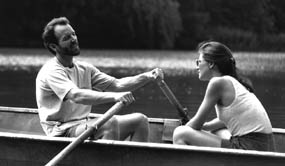 Jennifer van Dyck (Lisa) -- Ms. van Dyck has had featured roles on Broadway in Nicholas Martin's critically acclaimed production of "Hedda Gabler", the Tony Award nominated "Dancing at Lughansa", "Two Shakespearean Actors", and "The Secret Rapture". She has also appeared in numerous productions at Playwright's Horizons, New York Shakespeare Festival, and the Williamstown Theatre Festival. Other film appearances include "Across the Universe", "The Namesake", "Signal 7", and "Bullets Over Broadway". On televiison, she has guest starred in episodes of "Law & Order", "The Education of Max Bickford", "Spin City", "The Equalizer", and "Cosby Mysteries", and was a series regular on the Emmy-winning "The Days and Nights of Molly Dodd".

John Cunningham (Paul) -- Mr. Cunningham's many leading Broadway appearances include the original casts of "Amour", "Design for Living", the Tony Award wining "Titanic" (as Captain E.J. Smith), "Camping with Henry and Tom" (as Henry Ford), "Six Degrees of Separation" (as Flan, the husband), "The Sister's Rosensweig", "Sunday in the Park with George", "1776", and "Cabaret", as well as the legendary "Company". His film appearances include "The Jackal", "Nixon", "Dead Poets' Society", "Mystic Pizza", and "School Ties".

Ellen Greene (Carol) -- Best known for her starring role as 'Audrey' in both the stage and film productions of "Little Shop of Horrors", Ms. Greene's other film appearances include featured roles in "The Cooler", "The Professional", "Talk Radio", "Naked Gun 33 1/3", and "Next Stop, Greenwich Village". Her stage appearances include various New York Shakespeare Festival productions, David Rabe's "In the Boom Boom Room", and a Tony Award nominated performance in "The Three Penny Opera".

Stephen Bogardus (Abel) -- Mr. Bogardus was nominated for a Tony Award for his performance on Broadway as Gregory in "Love Valor Compassion", and he recreated the role for the film . He also created the role of "Whizzer" in the Off-Broadway and Broadway productions of "Falsettos", and had featured roles in the Broadway productions of "Man of La Mancha" (2002 revival), "High Society", James Joyce's "The Dead", "The Grapes of Wrath", "Les Miserables", and "West Side Story" (1980 revival). On TV, he has guest starred in "Murder, She Wrote", "Cagney and Lacey", "Law and Order", and "New York Undercover", and played recurrent characters on "As the World Turns" and "All My Children".

Zack Winestine (Writer/Director/Producer) -- Mr. Winestine has directed short films, documentaries, and music videos, and written two previous feature screenplays. "States of Control" is his first feature film as Director. He has also worked for many years as a Director of Photography. His credits include independent features ("Strawberry Fields", "The Next Step", "The Rook"), over 30 music videos (for groups such as the B-52's, ZZ Top, Harry Connick Jr., and Public Enemy), documentaries, and commercials. Before becoming a D.P., he worked as a Camera Assistant on over 20 feature films, including "Ironweed", "Five Corners", and "Crocodile Dundee". A formative early experience was his work in England as assistant to the Director of Photography on Stanley Kubrick's "The Shining". He graduated cum laude from Princeton University, majoring in Religion.

Priscilla Guastavino (Producer) -- Ms. Guastavino began her career as a theatrical stage manager. In 1981, she joined the staff at Screen Actors Guild as a location representative. Five years later she started working as an Assistant Director, moving up to Unit Production Manager in 1992. Other films she has produced include the award-winning "Welcome to the Doll House", released by Sony Classics.

Joanne Pawlowski(Producer) -- A filmmaker and writer, Ms. Pawlowski has directed and edited three documentaries which have received world-wide distribution. She was educated at Harvard and Princeton, and her plays have been produced in New York City.

Susan Starr (Director of Photography) -- Trained as a painter, Ms. Starr has shot two other independent features. She worked for years as a Camera Assistant on major New York features; her long-term relationship with D.P. Michael Ballhaus included work on "Death of a Salesman", "After Hours", "Quiz Show" and Barry Levinson's "Sleepers". As Camera Operator, her credits include Sidney Lumet¹s ³Strip Search², Alan Rudolph¹s "The Secret Lives of Dentists", ³13 Conversations About One Thing², ³Julie Johnson², and the Sidney Lumet TV series "100 Centre Street". She also collaborated on the photography for two documentaries directed by Louis Malle.